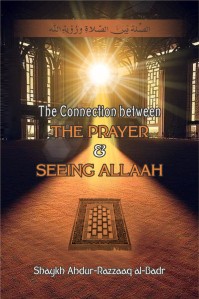 Certainly the most excellent favor and the most complete blessing for the people of paradise is seeing their Lord, The Most Greatest, The One Who Possesses, honor and beauty. This is the delight of their hearts and the comfort of their eyes, the greatest bliss and pleasure in the abode of delight.

It was narrated by Muslim in his saheeh on the authority of Suhayb, that the Prophet (Sallallaahu alaihi wa sallam) said:

When the people of paradise enter the paradise Allaah the Blessed and Most High will say: “Do you desire an increase in anything?” The people will say: “Have You not made our faces white? Have You not entered us into the paradise and saved us from the fire?!” He (the Prophet) said: ‘He (Allaah) will then remove the covering and they will not be given anything more beloved to them than looking at their Lord, the Mighty and Majestic.’

There is a connection between seeing Allaah and the prayer. Whoever is from the people who establish prayer, then he is much deserving of this favor. And the one who is neglectful (of the prayer) then he is worthy of being deprived (of this favor) and will be from the people of loss. Certainly, this connection is substantiated by the Book and the Sunnah. As for the Book, Allaah says:

“Faces that day will be radiant” (75:22)
Meaning; from the beauty, meaning a beautiful radiance; brightly pleased. And His statement:

“Looking at their Lord” (75:23)
Meaning: by seeing Him with their eyes, by their vision.

‘They have the right to be radiant while they are looking at the Creator. Then Exalted is He, mentioned another category (of people) the people whose faces will be contorted, completely gloomy. He mentioned from among their actions was abandonment of the prayer. This shows that the people of the first category are the people of radiance and are those who will see Allaah. These are from the people who establish the prayer.’

As for (evidence from) the Sunnah, then in the two Saheeh’s, on the authority of Jareer ibn Abdillaah, who said:

“We were sitting with the Messenger of Allaah (Sallallaahu alaihi wa sallam) when he looked towards the moon on a full-moon night and said afterwards: ‘Surely you will see your Lord just as you see this moon, you will not be obstructed in seeing Him. So if you are able to not be occupied and overcome by things which will distract you from the prayer before the sun rises and before it sets then do so!’ Meaning the Asr prayer and the Fajr. Then Jareer recited (the verse) “And praise your Lord before the sun rise and before the sunset” (20:130)

In this hadeeth is an indication to the connection between the prayer and seeing (Allaah).

Ibn Rajab (may Allaah have mercy on him) said:

“It is said as it relates to the command with preserving these two prayers coming immediately after mention of the seeing (of Allaah) that the greatest (loftiest) thing in paradise is seeing Allaah the Mighty and Majestic and the most noble of actions in the life of this world are these two prayers. Therefore in guarding them it is hoped that the person will enter Paradise and will see Allaah there.”

And there is no doubt that the companions when they heard the statement of the Prophet (Sallallaahu alaihi wa sallam) : ‘Surely you will see your Lord just as you see this moon, you will not be obstructed in seeing Him’, a great yearning filled their souls and a wondering about the actions which will be the cause of obtaining this greatly sought pursuit. And from the excellence of the Prophet’s advice and completeness of his clarification, he answered it without being asked.

In this is an indication from him (Sallallaahu alaihi wa sallam) that, seeing Allaah on the Day of Judgment will not be obtained by merely wishing. As Allaah says: “This is not a matter of your merely wishing or the wishing of the People of the Book” (4:123) Rather it is a must to perform actions, be upright, strive hard and have full commitment to Allaah. For this reason the Prophet (Sallallaahu alaihi wa sallam) explained the means which will allow the servant to obtain seeing Allaah. Therefore he directed to two great prayers, namely Fajr and Asr. Many texts have been narrated in relation to the matter of these two (prayers) which point to their virtues. They are mentioned specifically for what is contained in them of great virtues and from the weightiness (of them) upon many people.

Therefore whoever elevates his concern and Allaah assists him and gives him success in preserving these two prayers then he must be much more preserving of the other prayers (as well) rather the Fajr prayer specifically, (as it ) is the commencement of the day. Whoever Allaah honors with getting up to perform this prayer and giving importance to it will be aided for the remaining prayers of that day. For how the servant acts in relation to the Fajr prayer applies (to his actions) for the rest of the day.

As some of the Salaf would say: “Your day is like your camel; if you take hold of the beginning of it then the later part of it will follow you”

And the Prophet’s statement: “Do not become occupied…” Is an indication that in this life are many affairs that will distract and divert man from guarding these two prayers. And how much more are the things that divert in these days of ours! There are people whom drinking tea overcomes and diverts from these prayers which is the beauty of this worldly life. Some are distracted by petty conversation, immoral night chat, useless entertainment and evil viewings. And also from people are those whom sleep overcomes, and so on.

In this Hadeeth also is evidence that the correct sound belief affects the actions of the slave and his ways. So the more his faith increases and his certainty strengthens, the more he increases in uprightness, diligence, (righteous) work, and observing the obedience of Allaah.

And because of this connection between the prayer and seeing Allaah our Prophet (Sallallaahu alaihi wa sallam) used to supplicate at the end of his prayer before tasleem for this great delight and wealthy reward. Narrated by an-Nasai in his sunan on the authority of Ataa ibn as-Saaib from his father who said: “Ammaar bin Yaasir led us in prayer and he shorted it. So some of the people said to him:’you have made the prayer light or shorted it! He said: ‘As for that, I was supplicating with some supplications I heard from the Messenger of Allaah. So he when he stood a man from the people followed him, he was Ubay though he didn’t reveal his name and asked him about the supplication then the man came (back) and informed the people of it. (The supplication was)

“O Allaah, by Your Knowledge of the unseen and by Your Power over the creation , let me live if You know that life is good for me , and let me die if You know that death is good for me . O Allaah , I ask You to grant me fear of You in private and in the open . I ask you for the word of truth in times of contentment and anger. I ask You for moderation in wealth and in poverty. I ask you for blessings never ceasing and the coolness of my eye (i.e. pleasure) that never ends. I ask You for pleasure after Your Judgment and I ask You for a life of coolness after death. I ask You for the delight of looking at Your Face and the earning of meeting You without any harmful distress and misleading trials befalling me. O Allah, dress us with the beauty of Faith, and make us guides who are upon (correct) guidance.

May Allaah favor us all with guarding the prayer. We ask Allaah for the delight of looking at His Face and the yearning to meet Him without any harmful distress or misleading trial.

We ask Allaah to make this a benefit for us and for you.