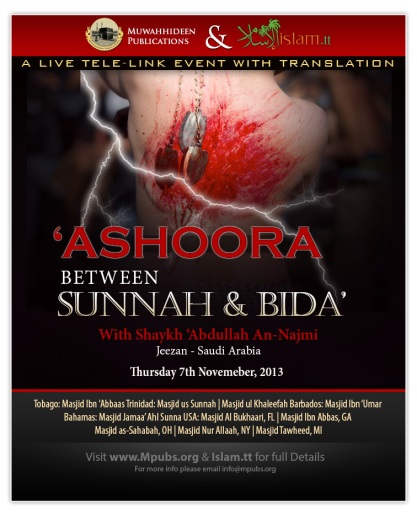 The Noble Shaykh ‘Abdullah an-Najmi (May Allah Preserve Him) from the mashaayikh of Jeezan, Saudi Arabia  is a student of Ash-Shaykh Ahmad an-Najmi (rahimahullah) and Shaykh Zayd al-Madkhalee (hafidhahullah).

Ibn ‘Abbaas (radhiyAllahu ‘anhumaa) reported, “The Messenger of Allah (sallAllahu ‘alayhi wa sallam)observed Saum (fasting) on the day of ‘Ashoora and commanded us to fast on this day.” [Al-Bukhaaree and Muslim]

Abu Qatadah (radhiyAllahu ‘anhu) reported, The Messenger of Allah (sallAllahu ‘alayhi wa sallam) was asked about observing As-Saum (the fast) on the tenth day of Muharram, and he replied, “It is an expiation for the sins of the preceding year.” [Muslim]

Ibn ‘Abbaas (radhiyAllahu ‘anhumaa) reported, The Messenger of Allah (sallAllahu ‘alayhi wa sallam) said, “If I remain alive till the next year, I shall also observe fast on the ninth of Muharram.” [Muslim]

Despite these clear cut ahadeeth, there are many accursed innovations practiced on this day particularly by the Shi’a who claim to mourn the murder of al-Husayn (radhiyAllahu ‘anhu) by performing acts which blatantly oppose the Sunnah of the Messenger (sallAllahu ‘alayhi wa sallam).

Reiterating this point, Shaykh Ibn Baaz (rahimahullah) stated, “Again, mourning on the Day of ‘Ashoora` is one of the condemned Bid‘ahs introduced by ar-Raafidhah, with which they contradicted Ahlus Sunnah wal-Jamaa‘ah (those adhering to the Sunnah and the Muslim main body), and the path of the Sahaabah(Companions of the Prophet). Consequently, it is not permissible to imitate them in this matter.”

Reference: Ibn Baaz, ‘Abdul ‘Azeez. “Hadith: Anyone who bathes on the Day of â€˜Ashuraâ will not be sick during that whole year.” The General Presidency of Scholarly Research and Ifta.http://alifta.net  (accessed November 6, 2013).

Shaykh ‘Abdullah an-Najmi (hafidhahullah) will clarify for us the established Sunan of the day of ‘Ashoora`and by the Permission of Allah refute the acts of innovation associated with it according to the Qur’aan andSunnah upon on the understanding of the Salaf-us-Saalih.

We ask Allah to guide us to all that He loves and is pleased with and that He protects us from falling into innovation in the Deen.