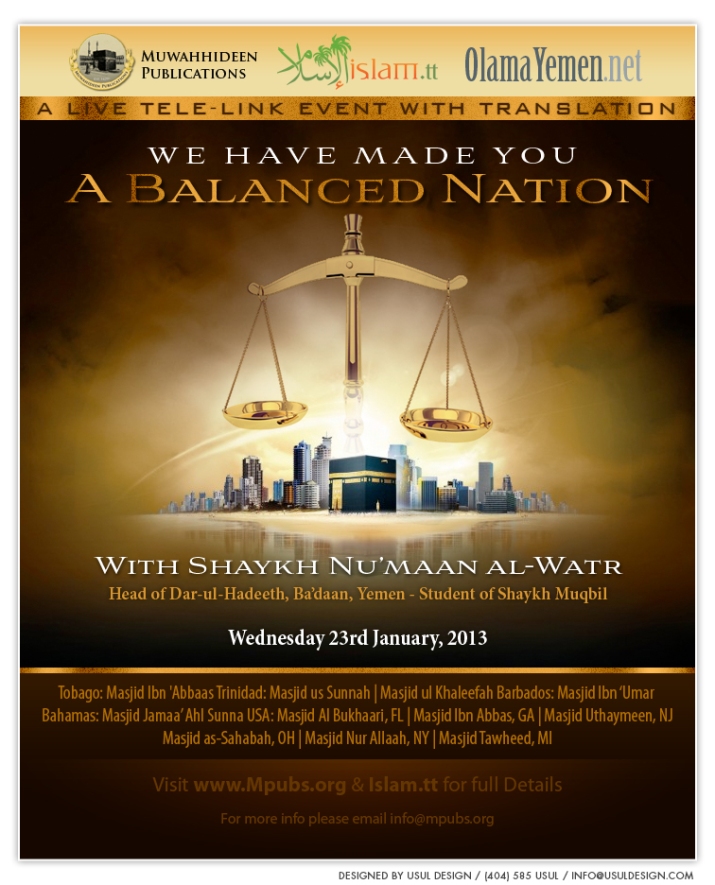 Muwahhideen Publications facilitated a LIVE tele-lecture with Shaykh Nu’maan al-Watr (hafidhahullaah), who is from the mashaayikh of Ba’daan, Yemen in the district of Ib, and head of Dar-ul-Hadeeth there. The Shaykhaddressed us on the topic of Islaam being balanced, between negligence and extremism.

This lecture event was translated LIVE into English by our brother Hisham AbouZeid.

Shaykh Nu’maan al-Watr (hafidhahullaah) commenced this lecture by stating that Islaam is the middle path; it is the Deen void of shirk and it is the Deen that Allaah is pleased with for His slaves. Surely, Allaah has relieved us of shackles and chains and made this Deen easy and comprehensible in both creed and application. The creed is compatible with inherent human nature that has not been corrupted and fulfils the needs of the soul and body. It is the Deen that can solve all the problems of mankind; and whoever holds tenaciously to it will find happiness, guidance and safety and will not be humiliated. The believer will become good in himself and would help others attain goodness.

Our Shaykh further stated that whoever contemplates, would realise that Islaam is between two falsehoods – negligence and extremism. This nation is one that is just and its creed is founded upon worshipping Allaah alone without any partners.

Shaykh Nu’maan then went on to exemplify and explain some of the areas in which Islaam takes the middle course, between negligence and extremism.

The Shaykh (hafidhahullaah) ended by saying it is upon us to learn the magnificence of our religion and become acquainted with the tremendous benefits of it in this life and the next. He then made du’aa for us all and asked Allaah to make us from those who are guided and guide others and that this sitting be a proof for us and not against us and that this gathering be a reason for happiness in this life and the next.

Source : Posted from mpubs.org with Permission