What or Who is Salaf?

The Permanent Committee (for Research and Verdicts) was asked: “What is Salafiyyah, and what is your opinion concerning it?”

So they replied: “Salafiyyah is an ascription to the Salaf. The word ‘Salaf’ refers to the Companions of Allaah’s Messenger (sallAllaahu ‘alayhi wa sallam) and the Imaams of guidance from the first three generations of whom the Messenger of Allaah (sallAllaahu ‘alayhi wa sallam) testified for as to their superiority when he said: ‘The best of mankind is my generation, then those who come after them, then those who come after them. Then there will come a people who will bear witness before taking an oath, and take an oath before bearing witness.’ [Reported by Imaam Ahmad in his Musnad, Al-Bukharee and Muslim]

The word Salafiyoon is the plural of Salafee, and it is an ascription to the Salaf. The meaning of the word Salaf has already been mentioned. Furthermore, it also refers to those who follow the methodology of the Salaf, which entails following the Book and the Sunnah, calling the people to them and acting upon them. So as a result of this, they become the adherents of the Sunnah and the unified body (Ahlus-Sunnah wal-Jamaa’ah).”

The Importance of learning the Deen :

“If Allah wants to favor someone, He grants him comprehension (understanding) of this religion.”
[Sahih Bukhari vol.1 # 71, Tirmidhi and Musnad Ahmad]

The example of guidance and knowledge with which, Allah has sent me is like abundant rain falling on the earth, some of which was fertile soil, absorbed rain water and brought forth vegetation and grass in abundance. (And) another portion of it was hard and held the rainwater and Allah benefited the people with it and they utilized it for drinking, making their animals drink from it and for irrigation of the land for cultivation. (And) a portion of it was barren which, could neither hold the water nor bring forth vegetation (then that land gave no benefits). The first is the example of the person who comprehends Allah’s religion and gets benefit (from the knowledge), which Allah has revealed through me (the Prophet) and learns and then teaches others. The last example is that of a person who does not care for it and does not take Allah’s guidance revealed through me (He is like that barren land.)” [Sahih Al-Bukhari v.1 no.79. Narrated by Abu Musa]

“It is only those who have knowledge amongst His slaves that fear Allah.” [Soorah Al-Fatir (35): 28]

“Seek knowledge, because seeking it for the sake of Allah is a worship. And knowing it makes you more God-fearing; and searching for it is jihad, teaching it to those who do not know is charity, reviewing and learning it more is like tasbeeh. Through knowledge Allah will be known and worshipped. With the knowledge Allah will elevate people and make them leaders and imams, who will in turn guide other people.”[Fatawa Ibn Taymiyya vol.10, p.39]

“Whoever treads on a path in search of Islamic knowledge, Allah will ease the way to Paradise for him. The angels will lower their wings, pleased with this seeker of knowledge, and everyone in the heavens and on earth will ask forgiveness for the knowledgeable person, even the fish in the deepest of waters will ask for his forgiveness” [Abu Dawud, Ibn Majah, Tirmidhi # 2835-sahih hadith]

“He whom death overtakes while he is engaged in acquiring knowledge with a view to reviving Islam with the help of it, there will be one degree between him and the Prophets in Paradise .” [Al-Tirmidhi Hadith no. 249. Narrated by Al-Hasan al-Basri] 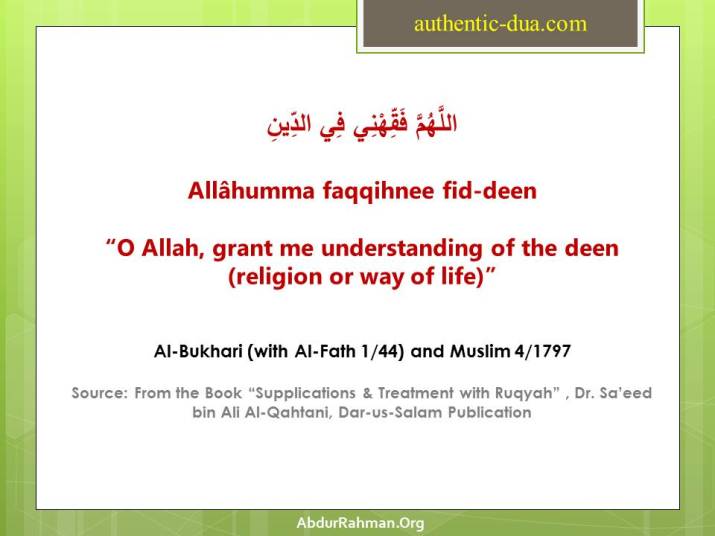