16. (Iblis) said: “Because You have `Aghwaytni’, surely, I will sit in wait against them (human beings) on Your straight path.

17. “Then I will come to them from before them and behind them, from their right and from their left, and You will not find most of them to be thankful.”

Allah said that after He gave respite to Shaytan, (till the Day they are raised up (resurrected)) and Iblis was sure that he got what he wanted, he went on in defiance and rebellion.

He said, (“Because You have `Aghwaytani’, surely, I will sit in wait against them (human beings) on Your straight path.”) meaning, as You have sent me astray. Ibn `Abbas said that `Aghwaytani’ means, “Misguided me.” Others said, “As You caused my ruin, I will sit in wait for Your servants whom You will create from the offspring of the one you expelled me for.”

He went on, (Your straight path), the path of truth and the way of safety. I (Iblis) will misguide them from this path so that they do not worship You Alone, because You sent me astray. Mujahid said that the `straight path’, refers to the truth.

(Shaytan sat in wait for the Son of Adam in all his paths. He sat in the path of Islam, saying, `Would you embrace Islam and abandon your religion and the religion of your forefathers’ However, the Son of Adam disobeyed Shaytan and embraced Islam.

So Shaytan sat in the path of Hijrah (migration in the cause of Allah), saying, `Would you migrate and leave your land and sky’ But the parable of the Muhajir is that of a horse in his stamina So, he disobeyed Shaytan and migrated.

So Shaytan sat in the path of Jihad, against one’s self and with his wealth, saying, `If you fight, you will be killed, your wife will be married and your wealth divided.’ So he disobeyed him and performed Jihad.

(Then I will come to them from before them) Raising doubts in them concerning their Hereafter,

(and (from) behind them), making them more eager for this life,

(from their right), causing them confusion in the religion,

(and from their left) luring them to commit sins.”

(Then I will come to them from before them and behind them, from their right and from their left,) “He did not say that he will come from above them, because the mercy descends from above.”

(and You will not find most of them to be thankful.) “means, those who single Him out in worship?.” When Shaytan said this, it was a guess and an assumption on his part. Yet, the truth turned out to be the same, for Allah said,

(And indeed Iblis (Shaytan) did prove true his thought about them, and they followed him, all except a group of true believers. And he had no authority over them, except that We might test him who believes in the Hereafter, from him who is in doubt about it. And your Lord is Watchful over everything.) (34:20-21).

This is why there is a Hadith that encourages seeking refuge with Allah from the lures of Shaytan from all directions. Imam Ahmad narrated that `Abdullah bin `Umar said,

“The Messenger of Allah used to often recite this supplication in the morning and when the night falls, 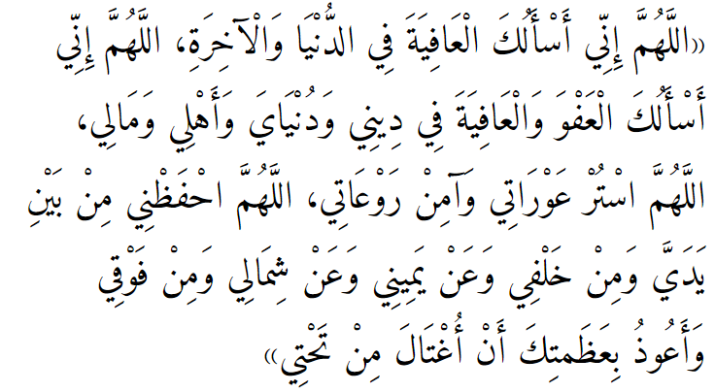 Waki` commented (about being killed from below), “This refers to earthquakes.” Abu Dawud, An-Nasa’i, Ibn Majah, Ibn Hibban and Al-Hakim collected this Hadith, and Al-Hakim said, “Its chain is Sahih. ”